~ Order now and choose your own delivery date at checkout ~ FREE delivery when you spend £55 ~
Home Learn About Cheese Six reasons why we all should support British farmhouse cheese.
Show Sub-menu

Six reasons why we all should support British farmhouse cheese. 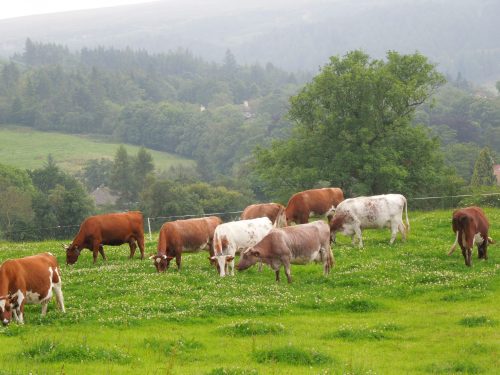 Continuing support of farm-made cheese is now more important than ever. With the loss of their routes to market (all restaurants and many independent shops closed) they (and small family cheese-business like The Courtyard Dairy) are struggling.
But farmhouse cheese doesn’t just benefit you by tasting amazing.  Buying farm-made cheese also has wider benefits:

Many farmhouse cheese-makers follow traditional techniques such as using heritage breeds and feeding them at pasture. Compared with modern industrial farming techniques there are less inputs (less additional bought-in resources), so they are more adept at providing a secure food product. Farming their animals traditionally, they naturally use less additional feed, less machinery, less fuel, less fertiliser and fewer pesticides.  Farmhouse cheesemakers add value to their milk on farm so this additional financial benefit allows them to practice these techniques, along with allowing them to farm sustainably (see below). 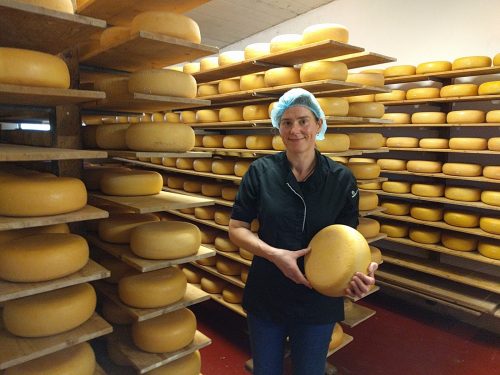 2. Environmentally-friendly and sustainable
Traditional farming techniques are less intensive. Using heritage animal breeds and traditional farming methods such as herbal-leys, grass feeding and mob-grazing, has a more carbon-friendly output. It is also more environmentally and economically sustainable; and contributes to greater bio-diversity for other animals such as birds, bees, small vertebrates and plant life. 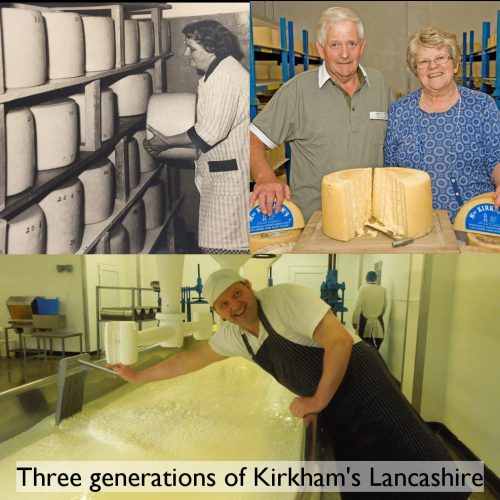 3. Britain’s food culture and social history
Farmhouse cheese-making is part of Britain’s social history. Many of the farmhouse cheese-makers produce in time-honoured fashion that has been handed down through families for generations. In some areas, farmhouse cheese-making using traditional techniques is practiced by just one producer, and if that knowledge is lost it will be very hard to restore. In recent times there has been a move to ‘restart’ cheeses that were lost during rationing – but rebuilding the generational knowledge that is needed is proving difficult.

4. Maintaining the renaissance
The resurgence of British farmhouse cheese is still relatively embryonic – a phenomenon of the last 15 years practiced more often than not by new small cheese-makers and tenant farmers. The effects of the current pandemic could easily undo all that good work and most seriously affect those that are cutting edge – the innovative producers driving the industry forward and really pushing things. If we lose them as a result, this could end the resurgence and stultify the birth of innovation in farmhouse cheese-making.

5. Farms simply cannot ‘moth-ball’
Their cheeses have already been made and are ready to eat now. Cheese is an important foodstuff but it has lost most of its normal route to market (the restaurant and pub trade has gone, export has disappeared, and so have a lot of independent shops). All cheeses have a limited shelf-life, so much of this surplus will be wasted. Some cheeses can be kept longer than others if there’s room to store them, but to survive, the farmers need to sell their cheese now. Production also has to continue; farms can’t simply ‘stop’, feed needs to be grown for winter, animals have to be milked, and the land still needs to be worked.

6. Support the rural economy
Farm-made cheese is, naturally, made on a farm, and this adds extra value to the local rural community. By making cheese the farm is further helping to keep its rural area vibrant, and create jobs – which provides an economic stimulus to an area that is greater than if the farm just sold their milk on. For example, the farm making Kirkham’s Lancashire cheese effectively employs an extra 15 people to make their cheese on their small 70-cow farm, and the farm making Baron Bigod Brie provides over 25 extra jobs on their farm – both these farms would be employing as few as four or less people if they were just milking animals and selling the milk on. The resulting positive economic impact to their area is massive.

Before the second world-war, farm cheese and local food networks were in a much stronger state then they are now. The impact of the war and associated rationing devastated them: 146 unique and different farmhouse Wensleydale cheese-makers, for example, were reduced to just one, a trend that was replicated throughout the cheese-making regions of the UK – Lancashire cheese producers decreased from 300 to just 22.
In recent years, thanks to a burgeoning food culture, the farmhouse cheese industry had started to rebuild, but it is early days yet – for example there is currently only one producer of raw-milk farmhouse Lancashire cheese – an even weaker situation than just after the war.
Before this pandemic farmhouse cheese already needed your support, and now it needs it more than ever. 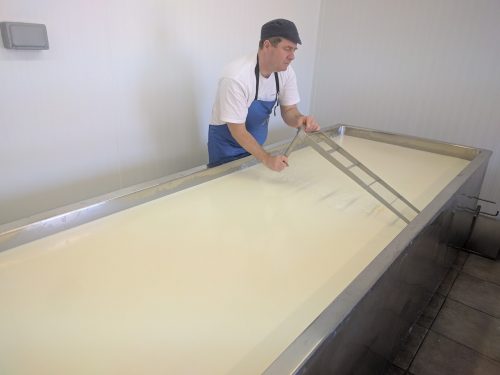 If you want to read more on how farmhouse cheese-making is being badly affected by the current pandemic, these are fascinating articles:

40p in every £1 stays within 40 miles – Where your money goes when you spend with The Courtyard Dairy.

Clipping from FT Magazine (May 2015) on the five best British cheesemongers.