~ Order now and choose your own delivery date at checkout ~ FREE delivery when you spend £55 ~
Home Learn About Cheese Sustainable Farming at Hafod Cheese: a day in the life of herdsman Nicholas Millard
Show Sub-menu

Sustainable Farming at Hafod Cheese: a day in the life of herdsman Nicholas Millard

The Holden’s farm – Bwlchwernen Fawr – is pretty small by modern UK standards, with a milking herd of just 73 Ayrshire cows. Nick is the only full-time member of farm staff apart from the Hafod cheese-makers. Nick lives on the farm (as do a lot of full-time farm workers) and here he describes a typical day in his life.

What does my role as a herdsman involve?
At around four in the morning, my first job of the day is to find the cows and bring them back to the farm for morning milking. Before milking I pull out from the herd the suckler cows whose job it is to nurse our Ayrshire heifer calves up until three months of age. Not many people do this, instead taking the calves off much earlier, but we found the calves do a lot better reared this way and as they’re Hafod cheese’s future, then we may as well do what we can to help them along in those crucial early months of life.
With the suckler cows in the calf shed, I begin milking the others, which takes anything from 50 to 90 minutes, depending on the number of cows in milk and what mood they are in. This morning the cows and I listened to the Hagen Quartet performing Beethoven and Schubert chamber works, and the milking all went splendidly and our ‘cultural well’ was once more topped-up. As the last cow leaves the milking parlour, I begin the wash down and wash cycle of the milking parlour. While the wash cycle is running, I take the cows out to their daytime grazing (always a different field to the night-time grazing in order to give them a balance between sweeter high-lying and more acidic low-lying ground) and then feed milk to our younger calves.
I shatter the peace that momentarily follows the switching-off the endless drone of the milking parlour, with the raging white noise of our elderly Massey Ferguson slurry scraping tractor. This is used to scrape the yards clear and send the slurry off into the slurry lagoon, where it is held until it is spread on the fields in the late winter/early spring, which will in turn help our fields grow green. Next, I get on the bedding tractor, which chops and blows straw into the calf pens, and then follow this by using the JCB telehandler to put out some haylage (conserved grass) in the cow shed for the cows to eat after their afternoon milking; this is what we call ‘buffer-feeding’ (feeding supplementary to the grazed grass).
My final routine job of the morning is to feed the larger young-stock animals – weaned Ayrshire heifers and the larger veal animals. They all get a mix of homegrown oats, peas and bought-in cow cake as well as haylage. The veal also get whey from the cheese making. 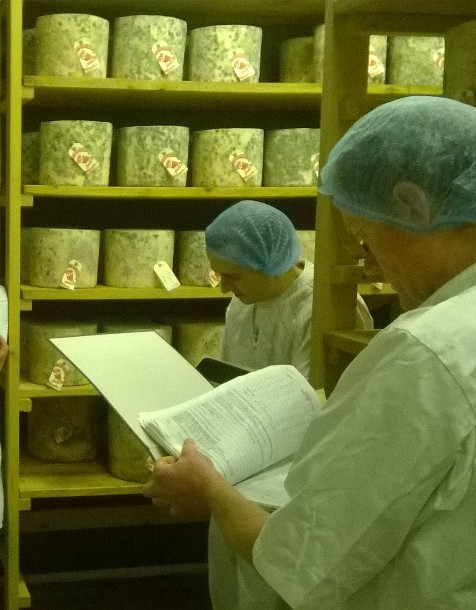 We make Hafod cheese every other day with two-days’-worth of milk. Today is a cheese-making day, so, before going in for breakfast, I pay the dairy a visit to ask the cheese manager, Rob, how much milk they have in the cheese vat and enquire as to the titratable acidity (TA) of the fresh milk (TA can indicate the microbiological activity of the milk as well as suggest milk protein levels). I also have a chat with Matt, the cheese storeman – if he’s cutting and packing the Cheddar I usually try some, and we discuss when it was made and who the customer is. If it is very good batch of Hafod we might get Rob involved and look up the make notes for that batch, likewise if it is very bad cheese (which of course rarely happens!).

Over breakfast I usually catch-up on social media activity for Holden Farm, for that also falls into my job remit these days, and send, into the atmosphere – and so onto Instagram, Facebook and Twitter – grainy, poorly-conceived and realised photos from my fairly useless mobile phone. The number of times I have destroyed phones while farming, however, would make me a poor fool to own anything more expensive.
Post-breakfast activities vary with time of year. In the spring and summer, breakfasts are usually very swift affairs because there’s always something happening out in the fields, whereas at this time of year, the farm is counting the days to housing the cows and everything is beginning to wind down. So far they’re out five days longer than last year and we’ll keep them out as long as the weather or the grass holds. 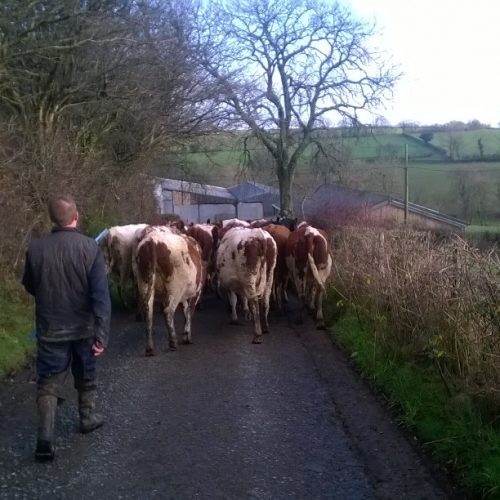 Then, before afternoon milking, I have a wander around, looking at what grazing we have for the evenings, and then feed the rose veal calves fresh whey from the Hafod cheese making. They LOVE the whey when it is warm. Around about two in the afternoon, my thoughts turn to getting the cows in. When I go and get them in, I will also move the electric fence so that they have a fresh strip of grass for the following day’s grazing. Strip-grazing like this optimises the efficiency at which the cows graze the fields and encourages better plant regrowth, which also maintains deep and healthy root structures.
Milking, calf feeding and taking cows back out to pasture happens next, as it did in the morning, and all being well, I’m back in the house within the hour of five to listen to a bit of Eddie Mair on BBC Radio 4. I was in a little later last night because I had a cow calving. A calving just before home time can have a huge effect on the landscape of one’s emotions, with calf sex and the general aliveness of the calf and/or cow being major factors in determining how elated or how wretched one feels at the end of the day. Last night I was elated – a beautiful little Ayrshire heifer calf out of a very fine little cow called I Am Cold. She’s the next step in the chain sustaining Hafod when, in two or so years, her milk will be found in the cheese.

Coming next (possibly sometime in 2017?): part two will cover the farming itself, particularly looking at our sustainable farming practices at Holden Farm and how these (hopefully) feed back into producing a cheese that speaks of the land it came from.

A bit more about me
I was born into a non-farming family in Cambridgeshire, which is not known for its dairying, but is better known for vast, intensive arable estates. However, from a very early age, I was inexplicably obsessed with mixed farming (livestock + arable). When I was nine years old, my family and I moved to Buckinghamshire, which at the time had a great many small family dairy farms (a lot of them were council-owned). Alas they are nearly all gone and now much of the land is dedicated to large scale arable interspersed by pony paddocks and barn conversions (the latter two were often once the council farms). It seemed most of my new school friends were the children of farmers and most weekends and school holidays were spent on these farms. Having repeatedly expressed an interest in a life in dairying, and having been repeatedly told that it was fool’s errand, I ended up falling in with some musical gadabouts and, upon leaving school at 18, I went on the road with my band and spent the next ten years of my life being a musician.

One of the things that many touring musicians and road crew do to break-up the mundane nature of touring life (there’s a lot of time spent waiting to go on stage) is to track down good food. For me, this simply fuelled my interest in fine food and the farming that produced the raw ingredients. By the age of 27 I didn’t see a particularly edifying future for me continuing to play drums in the world of rock and pop, and, with the encouragement of my partner Anna, went off to university to study agriculture. During that time, a dairy farmer I worked for encouraged me to develop my interest in reintroducing farmhouse cheese-making to Buckinghamshire. This led to a three-year voyage of discovery, visiting and working on assorted farmhouse cheese-makers’ farms across the UK and Ireland. I even wrote my BSc honours dissertation on how the sensory properties of cheese are affected by what cows eat, which ultimately ended with me going on a post-finals busman’s holiday to Auvergne and Jura, to see in the flesh all those farm practices that I had read about in numerous French research papers (the VAST majority of scientific research relating to cheese and agricultural practices emanates from France and Italy; little to nothing harks from UK-based researchers). Upon my arrival back in the UK in August 2014, the farm and cheese dairy owners Patrick and Becky Holden invited me to join the team at Holden Farm Dairy as the new herdsman.