~ Order now and choose your own delivery date at checkout ~ FREE delivery when you spend £55 ~
Home Learn About Cheese Cheese Musings & Tips Opening a cheese-shop … for dummies. (3/4)
Show Sub-menu 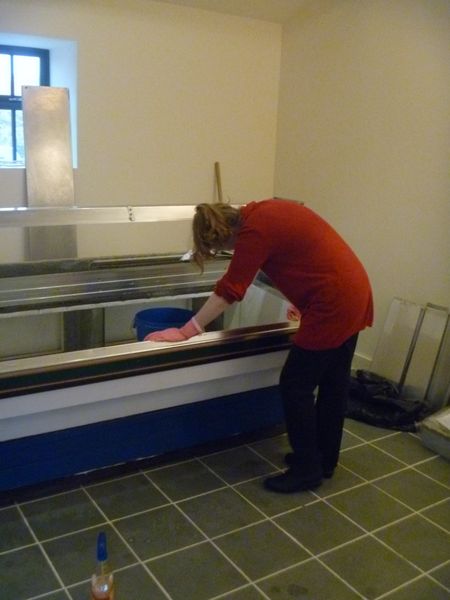 Refrigeration.  You probably know this, but chilling any space generally sucks moisture out of the air.  That would not only affect the quality of my cheese but would mean the cheese loses weight (and as my product is sold by weight…).  I wanted to chill the whole cheese shop down to 13 degrees Celsius, to mature and store most of the cheeses, and also have a little fridge kept colder so I could control the maturation of the soft and blue cheeses.  To me, not just holding the cheese in a cold store was of fundamental importance – I wanted to hold the cheeses in the absolute best possible conditions, so that they would continue to improve rather than deteriorate.  There is no point buying the best product in the world then letting it wither and die in your shop.  It had to be sold at its optimum – with me refining and ageing each cheese in the best conditions till it got there!

But I had some key criteria: the refrigeration could not be too aggressive, in order not too lose too much moisture.  So I investigated several avenues: a static cooler (great for being gentle cooling, but with the shop’s open door may not be strong enough), beer cooling lines (again really gentle but nowhere near powerful enough, good for a sealed maturing room but not for an open shop), and air-con units (dry the air too much), until I finally settled on a low-velocity overhead unit.  I reduced how aggressive the cooling would be by lowering the delta T (temperature difference across the coil), by carefully managing the fin spacing, by selecting the appropriate coolant type, and by under-specifying the condenser. 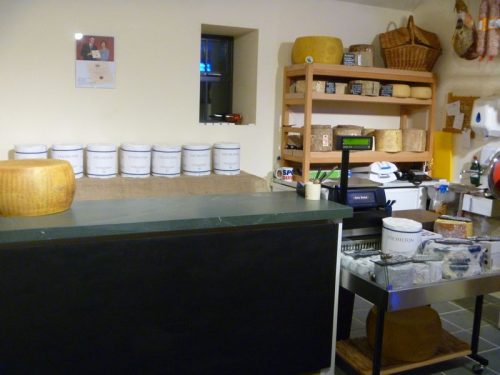 loading required to chill my shop seemed to varied massively between engineers).  So I got advice from someone I trust; a man seen as the refrigeration demi-god for cheese in the UK, Alan Hayes.  We analysed the thickness and material of the walls, roof insulation, window size, surrounding area, annual temperatures, and orientation of the shop.  Basically my shop in the north of England doesn’t need much chilling, as a solid old barn it is pretty much like a cave, but it does need a evaporator just in case we do ever get that heat wave like the one my grandparents remember from their childhood (it almost made it up about 10 degrees Celsius, and nearly stopped raining, apparently).

Job done.  Or so I thought.  To get my evaporator and get the coils sealed (so they aren’t affected by the ammonia given off by cheese) was a six-week turnaround.  But I wanted to be open before Christmas!  So I located a cheap emergency over-counter fridge that I could use to store cheese in overnight.  I was confident that as long as we could rotate those out on display it would be OK (plus measuring the min-max temperature in the shop had shown that in the last month it had gone no higher than 14 degrees Celsius).  So I bid on the battered fridge for £100, and … got it.  Then, with a few friends, I went to pick it up.  Battered is not the word.  An ex-Kebab shop fridge, it was still stained with chilli sauce all down the side, and hadn’t been cleaned inside at all.  I delegated the cleaning. 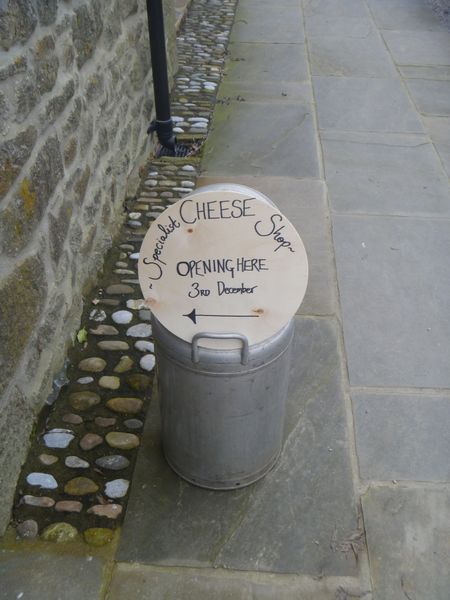 Fully cleaned, I switched it on.  Nothing.  I had a look at the wiring – a bit dodgy to say the least.  So I asked my refrigeration engineer to have a look at it.  He just looked at it, blew out through his lips and gave a typical ‘builder’ shrug:  “This fridge should be dead,” he said,  “It should have gone to fridge heaven”.  Could he make it work, even if  just for one month?  Of course he could: if I promised faithfully to get if properly disposed of when the overhead chiller was installed.

Job done at last.  The shop could open.  Or so I thought: my Italian ‘coffin’ fridge (for the blue cheeses) arrived flat packed on the eve of opening day – with only Italian instructions, and enough nuts, bolts and washers to repair the Eiffel Tower.  Some choice words and nine hours later we made it!  Officially open at last!  On the 3rd December 2012.

* The best people for refrigeration advice I found were people fitting out commercial bakers – as they need to chill premises down fast and keep moisture in.