~ Order now and choose your own delivery date at checkout ~ FREE delivery when you spend £55 ~
Home Learn About Cheese Cheese Musings & Tips Why do goats’ cheeses taste ‘goaty’? And why are some stronger than others?
Show Sub-menu

Why do goats’ cheeses taste ‘goaty’? And why are some stronger than others?

Many people have been put off for life by tasting a really-ripe goats’ cheese – saying it is ‘like licking a goat’! But contrary to popular opinion, goats’ milk doesn’t necessarily have the pungent smell often associated with it and the cheese doesn’t have to either.

It’s time to debunk the urban myth that Billy Goats kept with the females causes the strong goat taint in goats’ cheese.

Many people have stated that “keeping the Billy Goat with your female dairy herd is the reason some goats’ cheeses taste stronger than others”. And although this is trotted out time after time, it doesn’t appear to be true. It’s more likely to be a classic case of association rather than causation. Billy Goats, the male of the species, smell very pungent (it’s because they like to urinate on their beard and forelegs to attract females!) but that taint actually doesn’t seem to transfer into the milk.
It seems the fact that the male of the species smells strongly of goat leads people to assume this leads to the cheese tasting really goaty too! Whereas in fact, goats’ cheeses from farms where they house their Billy Goats with the females can show no discernibly overpowering goaty flavour, whilst others do.

So why does goats’ cheese taste of ‘goat’?

The scientific reason behind the goat flavour in goats’ cheese, is that their milk has a higher amount of three smaller-chain fatty acids (caproic, capric and caprylic fat) that give those ‘goaty’, ‘barnyardy’ flavours. But this doesn’t explain why some goats’ cheeses taste more strongly of goat than others.

So why do some goats’ cheese have a more pronounced goat flavour than others?

Whether the cheese tastes more or less of goat is because:

The fats could break down more (and faster) in some cheeses to produce the strong goaty flavours* for several reasons: 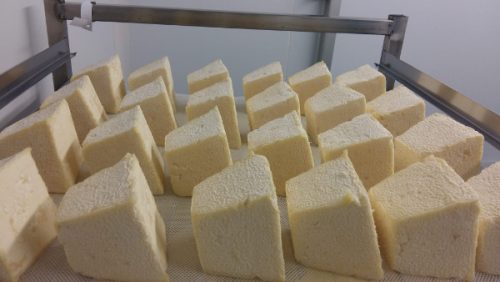 Often, in practice, this means the lighter/fresher cheeses and the hard cheeses like Gouda-styles exhibit less of the ‘goaty’ characteristics becauses the fat has not broken down to give the goaty flavours.
But it really depends the handling of the milk – both Ingot and Sinodun Hill are mature lactic goats’ cheeses that have rich, herbaceous flavours and only a delicate goat note, but at The Courtyard Dairy in the past we’ve further aged Sinodun Hill to create an affiné (extra-matured) version and the ‘goat’ flavour starts to intensify as the fat further breaks down.

Is that goaty flavour good or bad? Well that’s up to you to decide – it’s simply a question of personal taste!

(*Excessive fat breakdown can also lead to rancidity, with soapy and peppery flavours.)

Do you want to know more about the history of goats’ cheese, it’s benefits and how it differs from other milks in cheese-making and nutrition? – click here >.

What is the difference between goats’ milk (and cheese) compared to cows’ and sheep’s?

Each mammal produces slightly different milk. Although the constituents are broadly the same (water, lactose sugar, fat, protein, minerals and nutrients) the exact make up of each milk varies, depending…

Firstly lets debunk three broadly-held myths: Keeping the Billy Goat with your female goats is NOT the reason some goats’ cheeses taste ‘goatier’ than others, Goats are historic to the…

Hebden Goat – a video visit to the farm

Gillian and Tim Clough farm a small herd of 10 Anglo Nubian goats in Hebden Bridge (England). Gillian hand-milks the goats every day before using it to make Hebden Goats&#8217…

New cheese-makers on the block, Rachel and Fraser make Sinodun Hill goats’s milk cheese on their farm near Henley-on-Thames in Oxfordshire. Andy interviewed them to find out what makes these…